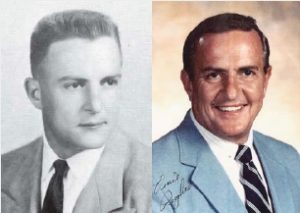 Vince started his teaching career at Blair in 1954 in the History Department after graduating from Bucknell University. Because of his athletic background (he had been a Junior College All American at Montgomery (Junior) College and the school’s outstanding Athlete in 1952), being involved in the school’s athletic program was a natural. He started as the assistant football coach the same year he began classroom teaching.

Vince then took three years off from teaching to serve in the U.S Army, returning to teach at Blair in 1958. He also resumed his coaching duties, and in 1962 he became the Head Football Coach. The highlight of his tenure was the 1964 undefeated County Championship team. Vince taught at Blair until 1973, and continued teaching in Montgomery County until his retirement in 1985, serving as Rockville High School’s Athletic Director during that time. In 1987 he was inducted into the Maryland State Athletic Directors Association Hall of Fame.

While many Blair grads recall Vince’s days as a football coach, thousands more remember him as a teacher who loved his field of history and tried to treat students with the same respect he received from them. He was often called on by administrators to address school assemblies, reminding students of the great opportunities that Blair provided and imploring them to remember that being able to say “I go to Montgomery Blair” brought responsibility, along with pride.